‘I Beat Cancer Twice, Toured The World And Now Have A Show In Vegas’ – Miral Kotb 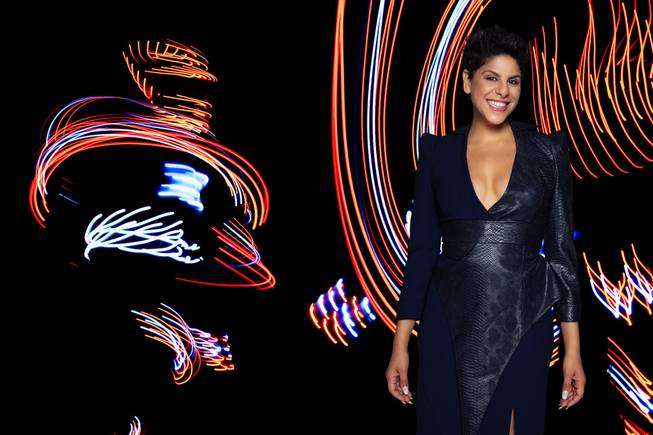 Miral Kotb is a two-time cancer survivor, who has overcome extreme obstacles both personally and within the ever-changing world of technology.  Miral Kotb is also a prolific entrepreneur in the fields of technology development and the performing arts. In 2009, she combined her passion for dance and technology to create iLuminate, the world’s first light dance technology company.

Read her incredibly inspirational and uplifting story in Newsweek <here>.

Women are notoriously underrepresented in the fields of engineering, technology, design, science, and mathematics, but Miral Kotb challenged the status quo. Miral Kotb, founder and chief executive officer of iLuminate – the world’s first light dance technology company. After graduation from Columbia University, Kotb worked as a software engineer at Bloomberg, LP before freelancing as a mobile app developer. At that point, Kotb wanted to explore the idea of combining her “loves” – dance and software development – which led to the creation of iLuminate. 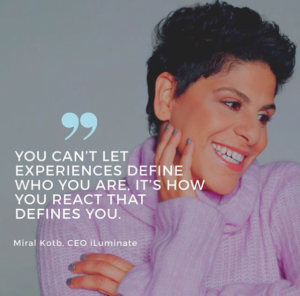 Miral Kotb’s iLuminate ignited an electrifying phenomenon, became a finalist on the hit television show America’s Got Talent, and was dubbed “the best new act in America”. iLuminate continues to perform at numerous corporate events across the globe and positively impacts millions of audience members with spectacular performances, including her new Las Vegas show “Happy Hour”. 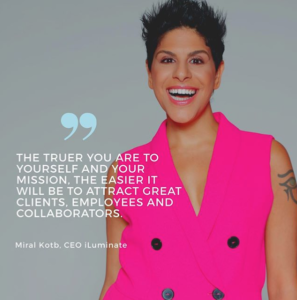 Miral is passionate about empowering young people to pursue opportunities in STEM/STEAM. An engaging and influential public speaker, she knows how to enlighten audiences about the creative side of technology. As a successful Entrepreneur she speaks about her experiences and the ups and downs of starting and running iLuminate, focusing on Women Entrepreneurs and general Entrepreneurship and Business Management.