Freckled Sky performs at America’s Got Talent: The Champions

Freckled Sky performs at America’s Got Talent: The Champions.

Freckled Sky’s performance in America’s Got Talent: The Champions – Episode 203 – consisted of performing a video projection dance routine where the two dancers are portrayed as puppets traveling through different worlds.

OTHER AMERICA’S GOT TALENT PERFORMANCES 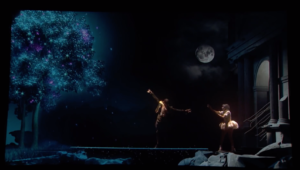 Freckled Sky‘s audition –  Episode 1002 of America’s Got Talent – consisted of combining video projections depicting rain effects and colors, water, and dance to portray the story of a man and woman trying to stay together in the face of an omnipotent being. Moved by the performance, Howard Stern pressed his Golden Buzzer to send Freckled Sky straight to the Quarterfinals. In Episode 1005, Heidi revealed that she wanted to use the Golden Buzzer on Freckled Sky, but Howard beat her to it.

Freckled Sky’s Week 2 Quarterfinals performance in Episode 1014 of America’s Got Talent, consisted of combining video projections depicting tall crystals and colorful silhouettes, water, and dance to portray the story of a man and woman that are unable to stay together despite their best efforts. The duo danced to Tom Odell’s “Can’t Pretend.” Freckled Sky finished in sixth, seventh, or eighth place in America’s Vote. 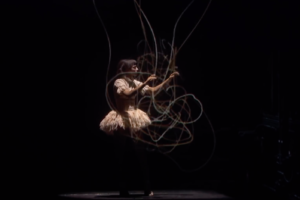